EasyView has went from being a pure graphing tool for our line of PC-loggers into a full-blown data analysis and computational tool for all sorts of data. Its connectivity and intuitive user interface are immensely appreciated by its users. EasyView has great import functions which makes it easy to visualize and analyze data from diffrent sourses.

EasyView 10 is raised to a newer environment which creates a number of opportunities. At the same time, we have saved the basic functionality like many of the older versions. You will recognize graphs, info table, computer table, and other plug-in functions as formulas, histograms, duration diagrams, etc., these features today is much cleaner. The new environment means we can make a number of improvements. Here are some: 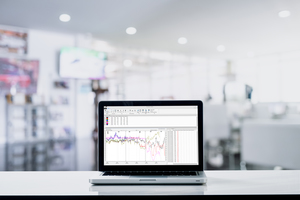 Several measurements can now be opened on separate screens. Which creates greater dynamism in the analysis when handling much data.

It's now really easy to get external data into the program. The imports are made step by step and displayed visually, which makes it really easy. This is a popular functionality that many have great pleasure from.

Very useful for those who work with the Energy Loggers Tinytag or Tinytag Thermocouple.
Imports files directly, without having to edit them in another application, smoothly.

Automatic scanning of the PC-logger

The logger looking for PC-logger on all ports, which means you never have to keep track of port numbers, everything happens automatically.

Project manager is simplified and is now called quick start. Here are the starting functions suitable if you run many similar measurements or loggers. Also useful if you work with templates, and presentation tools.

The very popular EasyView Pro has been given a “security shell” that makes it ideal as an evaluating and reporting tool in pharmaceutical applications as well as all other instances where measurement integrity is paramount.

Calendar, Rubber band, Auto, Manual, Area, pull an axis, select and double click. We have put a lot of effort into making it easy to learn and operate.

Package your tasks into "Quick Start"

The "Quick Start" is used to create recording templates covering all aspects of your data acquisition. Start several loggers simultaneously. Plan your presentational settings for best comparability and readability.

Start/Stop/Upload from your desktop via a shortcut to your "project". EasyView doesn't even have to be running!

The mathematical powers of EasyView are, to say the least, impressive. Integrate, differentiate, calculate simple differences or more complex recursive formulas. It's usually only one's imagination that sets the limit.

We have a web shop in Swedish with the possibility to do an automatic translation to your own language. Visit our web shop here.